In this photo essay, WestJet Magazine's Design Director Steve Collins recounts his recent trip  home to explore the tranquil waters of England’s canals, about two and a half hours from London. He and his wife cruise The Stourport Ring, a 119-km loop, making stops along the way.

I grew up in England’s West Midlands, about two and a half hours from London, with its network of canals in my backyard. I couldn’t wait to introduce my wife, Laura, to these historic inland waterways on a 10-day cruise on a narrowboat. We opt for a tour of The Stourport Ring, a 119-kilometre loop that skirts Kidderminster, Wolverley, Cookley, Kinver, Wordsley, Birmingham, Alvechurch, Worcester and parts of the Black Country—named for the soot arising from its ironworking foundries and forges.

These cities, towns and villages thrived during the UK’s Industrial Revolution, churning out goods such as metal, textiles, glass and ceramics, and the canals served as a means of cargo transportation. Competition from railways and motorways saw the canal network redundant by the mid-20th century and the canals fell into disrepair. An injection of government and third-party funding, however, has seen many canals restored to their former glory, with nearby restaurants, cafés and bars creating a buzz. 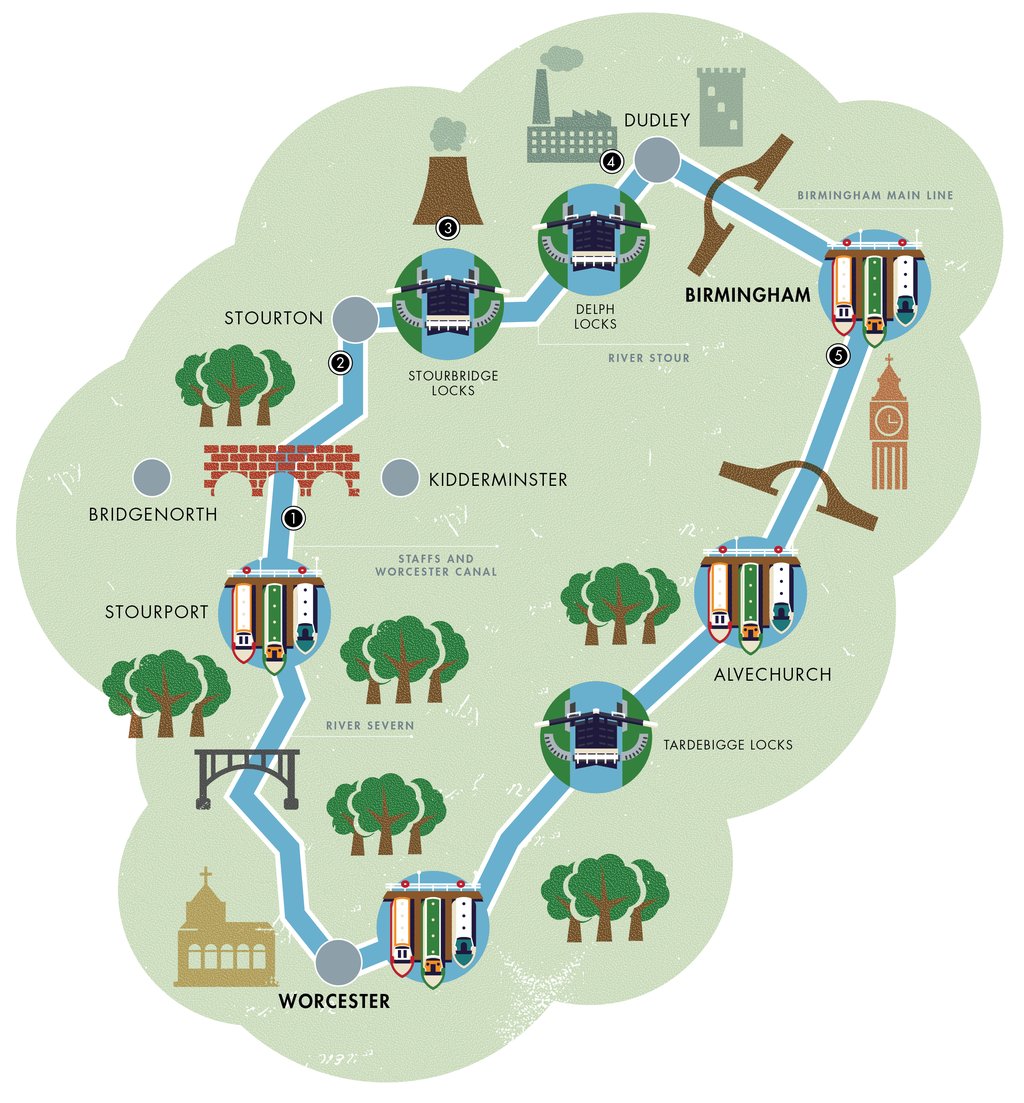 A complete circuit of the Stourport Ring takes around 10 days, so, before we hop aboard our narrowboat and hit the water, we head into Stourport-on-Severn, a Georgian canal town in the heart of the Severn Valley, to pick up some supplies. This quaint town, once labelled “Pioneer Town of the Canal Age,” is one of a handful in Britain founded as a direct result of a canal, namely the Staffordshire & Worcestershire Canal, which opened to the area in 1772. The town is also home to five canal basins—wider areas of the canal that allow narrowboats to easily load, unload and turn. As we stroll along High Street, we stumble across Laurence Gough & Sons, a family butchers that serves up organic, free-range meat, game and pork pies. Nearby, the Stourport Bakery offers homemade treats that team perfectly with a hot cup of tea—don’t miss the gooey white chocolate cheesecake.

(Clockwise from top left) A lock in action at one of Stourport’s basins; old handbags make great planters atop a narrowboat; a fellow boater we met along the way; one of the canal’s many low bridges.

At Stourport Marina, Starline Narrowboats’ owner Terry Huckerby and Boat Handling Instructor Dave Staines give us a thorough tour of North Star, an 18-metre craftsman-built narrowboat. The boat is slim, and, while the living quarters are tight, I’m surprised to learn it sleeps up to 12 people. Narrowboats may be simple in design, but they’re built like tanks. I volunteer to operate the 100-odd locks along the route, so Laura, under Dave’s instruction, gets the hang of steering by moving the tiller to the right to go left and to the left to go right. After a quick cruise, we moor up. “Never leave the boat without the main rope,” Dave warns. Despite its weight and size, the boat cannot go anywhere while you are holding this rope. Dave shows Laura how to secure the boat to the mooring station with a quick release knot.

“Use your legs, stay low and use the foot grooves,” advises Dave as I set about tackling my first lock. Laura tentatively steers the boat into the lock’s chamber and a mark on the wall indicates where the boat needs to stay to prevent it from flooding when the paddles—sliding panels in the gates—open. After shutting the gate behind the boat, I insert the key into the paddle gear, which resembles an oversized laundry mangle, and, with some effort, crank it clockwise, Clack. Clack. Clack. As the grooves of the paddle in the 1,000-plus-kilogram front gate pass an oily cog, the resistance eases and it opens, sending water into the chamber and raising the boat. Once the water levels have equalized, I push the front gates open and Laura steers through. Having successfully navigated our first lock, we’re on our own. “Relax,” I tell myself. “How hard can it be with a top speed of three miles per hour?”

The lock by St Mary and All Saints Church, Kidderminster

“Having successfully navigated our first lock, we’re on our own.”

(left to right) The paddle or winding gear; The Red House Glass Cone in Wordsley; rope marks on the bridge, remnants of horse-drawn boats.

Named for the thick black soot that covered the landscape, a result of the coal used in the area’s many factories, The Black Country—comprising Dudley, Sandwell, Walsall and Wolverhampton—was the heart of the nation’s Industrial Revolution, producing much of the nation’s textiles, ceramics, glass and more. We cruise along Stourbridge Canal and brace ourselves for the Netherton Tunnel which, at 2.7 km long, is just wide enough for two narrowboats to pass each other and was the last tunnel built during Britain’s Canal Age. Other than a shaft of light under each of the tunnel’s many air vents and a single head light on the boat’s bow, it’s pitch black. After almost an hour of unwavering concentration to keep the boat in a straight line, we emerge and point the bow toward Birmingham.

Embracing this slower pace of life, we cruise effortlessly along the Staffordshire & Worcestershire Canal—considered one of the country’s prettiest canals—and through the rolling countryside toward Kidderminster, once the heart of England’s carpet-making industry. We reach the rail viaduct at Falling Sands and moor up for a quick bite as the magnificent Severn Valley Railway train steams by overhead. Then we’re back on the water, treated to peripheral views of canal-side pub gardens, wild residential gardens, ivy-covered lock keepers’ cottages and fields of curious horses. We putter under small moss-covered bridges, each named and numbered, some crumbling at the corners after years of boating activity. We drift through Worcester, a historic cathedral city, and the nearby locks at the Diglis Basin Marina that open onto the mighty River Severn—Britain’s longest river.

(clockwise from top left) Lock and bridge at Whittington; horse-spotting on the Staffordshire & Worcestershire Canal; Worcester Cathedral; the River Severn.

Most mornings, we awaken to moody skies and a light fog hovering above the water. This only adds to the burst of smells, colours and sounds filling our senses as we set off for the day, bundled up in thick woolly sweaters while chowing down on breakfast sandwiches. We bump into first-time boaters like us, and our collective anxiety is replaced with nervous laughs and encouraging words as we gingerly pass each other. A group of wader-clad fishermen cheerfully lift their fishing rods out of our way as we work the angles of a tight right-hand turn to join the Stourbridge Canal. We moor at sunset, as the boat is only equipped for daytime use. Cool nights are spent on board drinking wine and revisiting tales of the day, or enjoying an alfresco canal-side pub supper washed down with a pint or two.

Moored up at Alvechurch Marina

Graffiti on the brick buildings signal that we are nearing Birmingham, home to England’s largest population outside of London. Cruising along the Birmingham Canal Navigations—rumoured to have more waterways than Venice—we turn into the Gas Street Basin and moor up for the night, joining the mass of full-time moorings and pleasure boaters. There’s plenty on offer in this revitalized city and we’re ready to hit the shops, take in a theatre show, and drink and dine at some of the city’s many restaurants and bars. We book a waterfront table at Bistrot Pierre, set in what was once the headquarters of the Birmingham Canal Company, and end the night with a beer at the historic Brewmaster’s House. After Alvechurch Marina and Worcester, we’re on the home stretch, and, as I fluently close the gate on my final lock, I’m struck by how life aboard a narrowboat is a bite back at the modern world—nothing is instantaneous while cruising along the canal. You have to watch as time passes by, but that’s the romance of it.

[This story appears in the March 2018 issue of WestJet Magazine]

6 Haunted Places in London You Probably Didn’t Know About

London, England, is home to a variety of famously haunted places, but there are some lesser-known spots guaranteed to spook you.

What to Do in Wimbledon Village During The Championships

When you're not sitting courtside, spend time horseback riding, sipping Pimm's cocktails and shopping in the neighbourhood surrounding the iconic tennis tournament.

The second-longest-reigning monarch in British history, Queen Victoria's legacy continues to thrive and there are some great sites in Scotland and England to visit to mark this special anniversary, such as Windsor Castle, the Isle of Wight and the new V&A Dundee museum.